WRITING ADVICE FROM MARK TWAIN: WRITE WITHOUT PAY UNTIL SOMEBODY OFFERS TO PAY
Thursday, December 22, 2016 by By Sandra Merville Hart 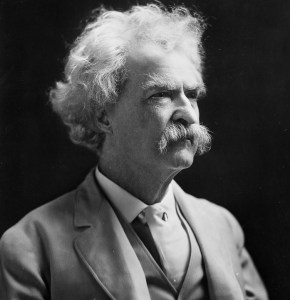 A recent graduate sent a few newspaper articles to editor Mark Twain requesting his candid opinion of his work. Then the young man went a step further: he asked the famous author to find him a job writing for a newspaper. After considering other professions, the graduate found each one already filled to capacity, leaving little room for success. The young writer believed Twain, with his contacts in the newspaper field, could negotiate the best employment terms possible though, of course, he didn’t expect the highest wages at the beginning of his career.

Though Twain responded graciously, his three-pronged advice may not have been what the overly-confident fellow wanted to hear. Yet his words still offer wisdom to struggling writers over a century later.

Firstly, Twain pointed out that all occupations—including literature—were hindered by a lack of people willing to work and not a lack of work. Hard-working, reliable, and capable individuals will always be in demand. However, idle workers, those who shirk duty, the unambitious, and those who seek their own comfort can be found anywhere.

All professions desire to find individuals willing to work hard. The field of literature is no different.

Secondly, Twain refused to offer an opinion on the young man’s writing, for he considered public opinion of the greatest value. In fact, he wrote, “The public is the only critic whose judgment is worth anything at all.” He offered reasons to back his thoughts.

At the time of Twain’s article around 1870, T.S. Arthur was a recognized editor and author. Twain argued that if Arthur had submitted his first manuscript to the young graduate, he would have begged the now-famous author never to write anything else. The same young man might have rejected “Paradise Lost” for being too depressing, but the story sold well. Many wise people in Shakespeare’s time didn’t like him, yet his work is still widely read.

Twain refused to judge the young man’s writing. If he praised it, the public might be bored with it. Condemning it could “rob the world of an undeveloped and unsuspicious Dickens or Shakespeare.”

Thirdly, Twain balked at finding the recent graduate a job. When the young man’s articles had proven themselves valuable, he wouldn’t have to search very hard to sell them. Surprisingly, Twain advised him to “write without pay until somebody offers to pay” for three years. If no one buys his work within those years of diligent work, he should search for another profession.

Diamonds in the rough may be difficult to recognize. How many writers cringe that editors read their early work and quickly rejected something that time and grueling practice would have polished into an acceptable piece?

Twain makes a strong point that good writing is a result of much hard work. If we want to be published, we hone our skills. After we are published, we continue to strive for excellence.

It feels like a never-ending struggle, but well worth the end result as the writings of Mark Twain, one of American’s best-loved authors, clearly demonstrate.